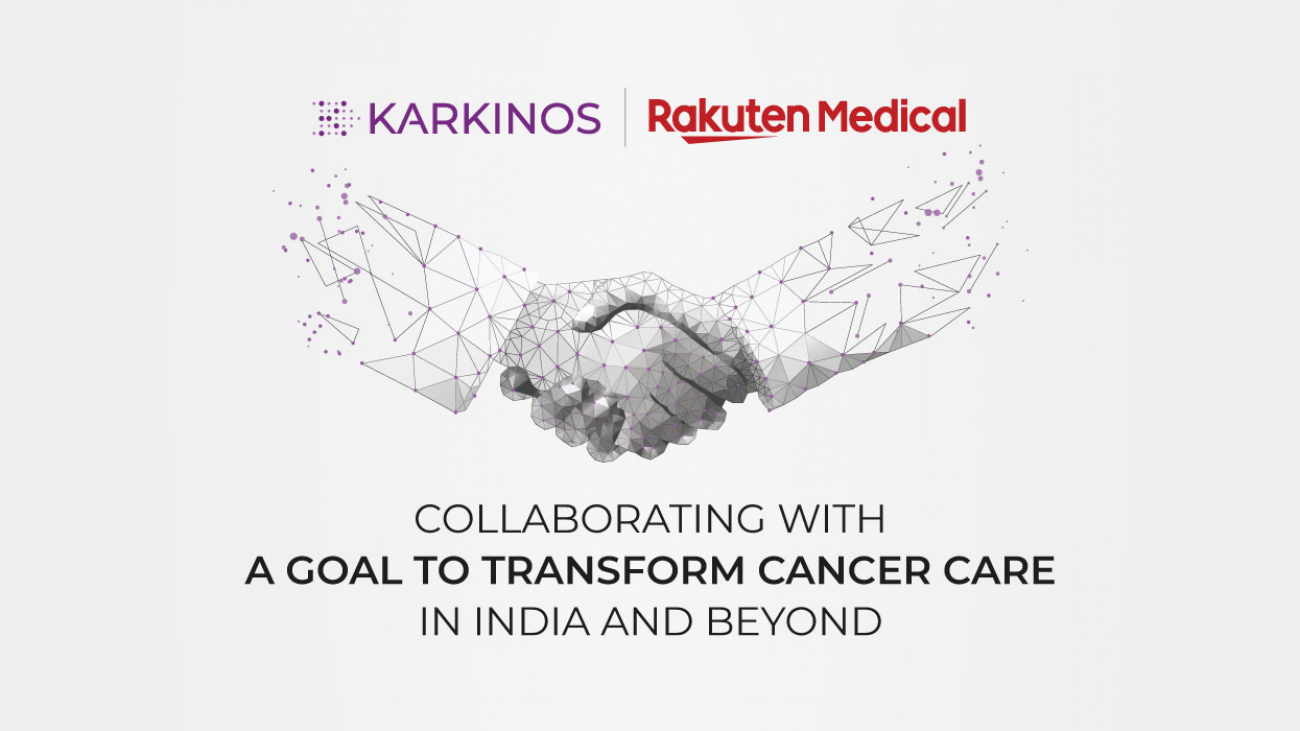 Rakuten Medical is focused on developing and commercializing innovative cancer treatments for multiple indications based on its Illuminox™ platform. Karkinos is a healthcare technology platform focused on delivering quality healthcare by providing access to, and availability of, cancer detection, diagnosis and treatment options. This strategic collaboration will enable continued innovation in cancer care with the goal of transforming cancer care in India and abroad.

Rakuten Medical’s first pipeline drug developed on its Illuminox™ platform, ASP-1929, has received approval from the Japanese Ministry of Health, Labour, and Welfare, and is currently the subject of a global phase 3 clinical trial for recurrent head and neck cancer. Karkinos Healthcare is pioneering the Distributed Cancer Care Network model in India addressing clinical needs that will bring quality care closer to patients. Karkinos already offers its services in Kothamangalam, Chottanikkara, Thodupuzha, Munnar locations across Ernakulam and Idukki Districts, in Kerala and is planning to ramp up its operations across India.

“We are happy to partner with Karkinos Healthcare, who is committed to transforming cancer care,” said Mickey Mikitani, Chief Executive Officer of Rakuten Medical, Inc. “We believe this partnership will open up more opportunities for cancer patients in the Indian market, help Rakuten Medical further develop and commercialize our treatment based on our Illuminox platform, and ultimately deliver on our mission to bring this technology to as many patients as possible.”

“Our collaboration with Rakuten Medical will allow us to introduce their breakthrough therapies and vital support structure for cancer patients in India,” said Venkataramanan R, Chief Executive Officer of Karkinos Healthcare. “We at Karkinos believe platforms like Rakuten Medical’s Illuminox platform can revolutionize cancer care in the country and beyond.”

About Rakuten Medical, Inc.
Rakuten Medical, Inc. is a global clinical stage biotechnology company developing and commercializing precision, cell-targeting investigational therapies on its Illuminox™ platform, which, in pre-clinical studies have been shown to induce rapid and selective cell killing and tumor necrosis. Outside of Japan, Illuminox therapies have not yet been approved as safe or effective by any regulatory authority. The company’s first drug developed on the Illuminox platform, ASP-1929, has received approval from the Japanese Ministry of Health, Labour, and Welfare, and is currently the subject of a global phase 3 clinical trial for recurrent head and neck cancer. Rakuten Medical is committed to its mission to conquer cancer and aims to realize a society where cancer patients can lead fulfilling lives. The company has 6 locations in 5 countries, including the United States, where it is headquartered, Japan, the Netherlands, Taiwan, and Switzerland. For more information, visit www.rakuten-med.com

About Karkinos Healthcare
Karkinos Healthcare is a technology driven oncology focussed managed health care platform for early detection and diagnosis of common cancers. The company espouses the use of a distributed cancer care network working with multiple healthcare institutions and professionals in the ecosystem with a view to get cancer care closer to the persons’ home by decoupling the delivery from the knowledge systems of care. For more information, visit https://www.karkinos.in/about-us/

About ASP-1929
Since 2013, Rakuten Medical, Inc. has been using an exclusively licensed antibody complex to develop new cancer therapies based on its Illuminox™ technology platform. Rakuten Medical’s first pipeline drug developed using its Illuminox platform is ASP-1929, an antibody-dye conjugate comprised of the antibody cetuximab and IRDye® 700DX, a light activatable dye. ASP-1929 binds to epidermal growth factor receptors (EGFR), a cancer antigen expressed in multiple types of solid tumors, including head and neck, cutaneous, esophageal, lung, colon and pancreatic cancers. After binding to cancer cells, ASP-1929 is locally activated by non-thermal red light (690 nm) illumination emitted by a laser device system. Pre-clinical data indicates that Illuminox technology induces a biophysical process that compromises cell membrane integrity, leading to cancer cell death and tumor necrosis. ASP-1929 received approval from the Japanese Ministry of Health, Labor, and Welfare in September 2020, and is currently under investigation in a global phase 3 clinical trial for recurrent head and neck cancer. Rakuten Medical, Inc. is moving forward with product development by conducting clinical trials of monotherapy and combination therapy with other drugs. Outside of Japan, ASP-1929 and the laser device system have not yet been approved by any regulatory authority.

About Illuminox™ platform
The Illuminox platform is an investigational platform based on a cancer therapy called photoimmunotherapy, which was developed by Dr. Hisataka Kobayashi and team from the National Cancer Institute in the United States. Rakuten Medical is developing the Illuminox platform as a technology consisting of a drug, device, and other related components. The drug component of the platform consists of a targeting moiety conjugated with one or more dyes leading to selective cell surface binding. The device component consists of a light source that locally illuminates the targeted cells with non-thermal light to transiently activate the drug.  Pre-clinical data have shown that this activation elicits rapid and selective necrosis of targeted cells through a biophysical process that compromises the membrane integrity of the targeted cells. Therapies developed on Illuminox may also result in local and systemic innate and adaptive immune activation due to immunogenic cell death of the targeted cells and/or the removal of immunosuppressive elements within the microenvironment. Outside of Japan, Illuminox therapies have not yet been approved as safe or effective by any regulatory authority.