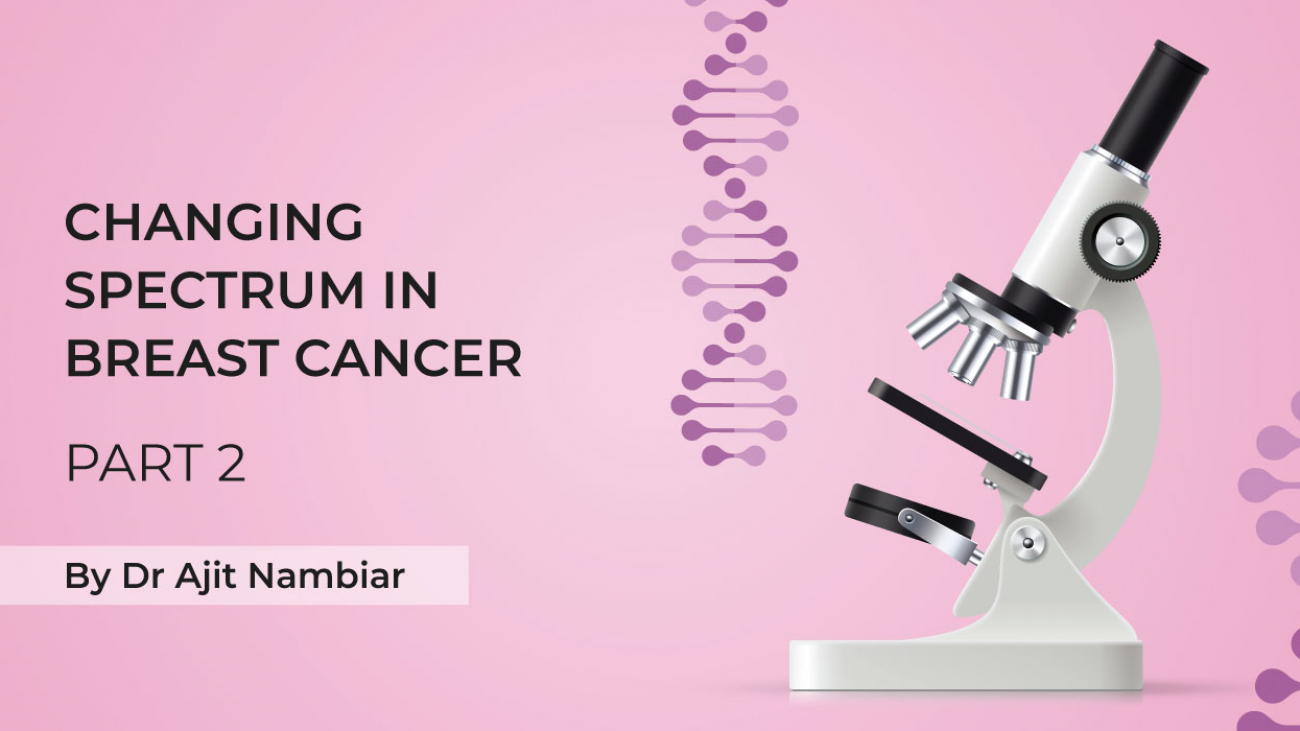 The journey till the beginning of this century was about seeing a doctor when a problem is encountered. A lump in the breast or to hide it till it fungates and smells, when people would find that out. A needle would diagnose the obvious but it was still mandatory to do a FNAC (Fine Needle Aspiration Cytology) test. The surgeon would then do a mastectomy (remove the cancerous breast) or less often a lumpectomy (remove only the lump with of course margins of normal tissue all around). Then what mattered was to examine the histological type or subcategory of breast cancer (for the pathologist all breast cancers don’t look the same under the microscope), grade it and stage it. That determines prognosis and followed up with a radiotherapy or chemotherapy. It was interesting that most breast cancers (80-85% fell into the commonest group of invasive ductal carcinoma, not otherwise specified NOS) but still behaved very differently for the same grade and stage of the disease.

Two critical words are grade and stage. “Grade” simply means how well or closely do they resemble the parent tissue from where they turn cancerous. Higher the grade (grade III would have least resemblance compared to Grade I and would mean an aggressive tumor). The stage would mean how far has the cancer spread. With stage 1 meaning a local disease and stage 4 meaning spread all over the body or at least much away from the original organ where the cancer started off. Say in case of breast the spread to the lung, bone, liver or brain would mean stage IV disease.

A landmark paper by the Stanford group, who in 2003 brought out a molecular subtyping of breast cancer using genomics, just set stage for a sea change in approach to breast cancers. The only problem was access to genomics was in very select institutions and more so the whole exercise was costly. But quickly within a few years it was learned that by using a simple Immunohistochemistry (IHC) test one could achieve the same result fairly accurately. The main subgroups of breast cancer were termed Luminal (subdivided into type A and B), HER2 overexpressed and the basal or triple negative category. The luminal group was driven by hormones (estrogen or progesterone) and HER2 group had an epidermal growth factor receptor which sends signals autonomously to the nucleus to divide and basal group or what is also called now the triple negative shows absence of the 3 markers (ER, PR and HER2) on IHC. This classification became mandatory for every breast cancer and this largely decided importantly the prognosis and management strategies in breast cancers.

But the initial phases were not easy journey in IHC. It was thought for a brief period that Indian breast cancers were largely Luminal negative unlike the west. But it was found that we hadn’t standardized our test procedures and once that was achieved, we corrected the misgivings. In India, we predominantly have a luminal group forming close to 60% of breast cancers, about 15% by HER2 subgroup and 25% were triple negative. This last group was considered higher than west who had 10% of tumors to be triple negative. This classification gave luminal better prognosis, HER2 intermediate and triple negative bad prognosis. Also, the luminal had hormonal treatment through tamoxifen, and HER2 had inhibitors which are labelled tyrosine kinase inhibitors (the enzyme which is attached to the receptor and aids the down signaling to the nucleus to divide). This HER2 group was amenable to a drug Herceptin (Trastuzumab). The triple negatives were the bad prognostic ones and were largely given general chemotherapy before and after surgical removal.

The surgical side also saw lumpectomy being practiced in oncological hands. The disfigurement to breast made further refinements in procedure to a process called “oncoplasty”, which meant a plastic surgical approach without compromising on oncological treatment of breast cancer. Another element in treatment is to address axillae, which meant gave loco regional control. This was considered a bit morbid as the nodes in axillae also drained the upper limbs and their removal would lead to lymphedema or swelling of upper limbs on the side the nodes are removed. Slowly the practice of sentinel nodes came in which meant during surgery the pathologist is asked (also called frozen section) about involvement of first station of involvement of nodes. Cancer of breast spread first to nodes in axillae (axillary nodes). So, during surgery the frozen section on axillary nodes decides whether cancer has spread to nodes or not. If nodes are negative for cancer, then a limited surgical removal of axillary nodes was performed.

Neoadjuvant treatment was a new approach of upfront chemotherapy before going under the knife especially in the HER2 and triple negative positive breast cancers. This helped to down stage cancers as chemotherapy would kill cancer cells upfront before surgical removal of cancerous areas. This brought about more of lumpectomy and less debilitating axillary removal of nodes. Response to this treatment is also considered a very good prognostic indicator. Radiotherapy was needed as the remainder of breast and axilla is a potential site for any seeds of cancer left behind.

All these treatment interventions and progress in understanding of biology of the cancer, truly changed the overall prognosis and survival indices in breast cancer. Overall, we can talk of at least 75% survival in those who can privilege themselves to the new developments. But still newer obstacles remained to be addressed as is true in science every time.

Dr. Ajit has expertise in the fields of onco-pathology, histopathology, cytopathology, and Molecular pathology with Breast and Lung as lead areas.

Dr. Ajit has authored 40 articles that are published in National and International Journals and is a scientific reviewer for 5 journals.

Dr. Ajit is the Trainer of trainers for Roche Merck PDL1 Assays and is also on the Medical Advisory Board of Pathology for Roche and Merck.