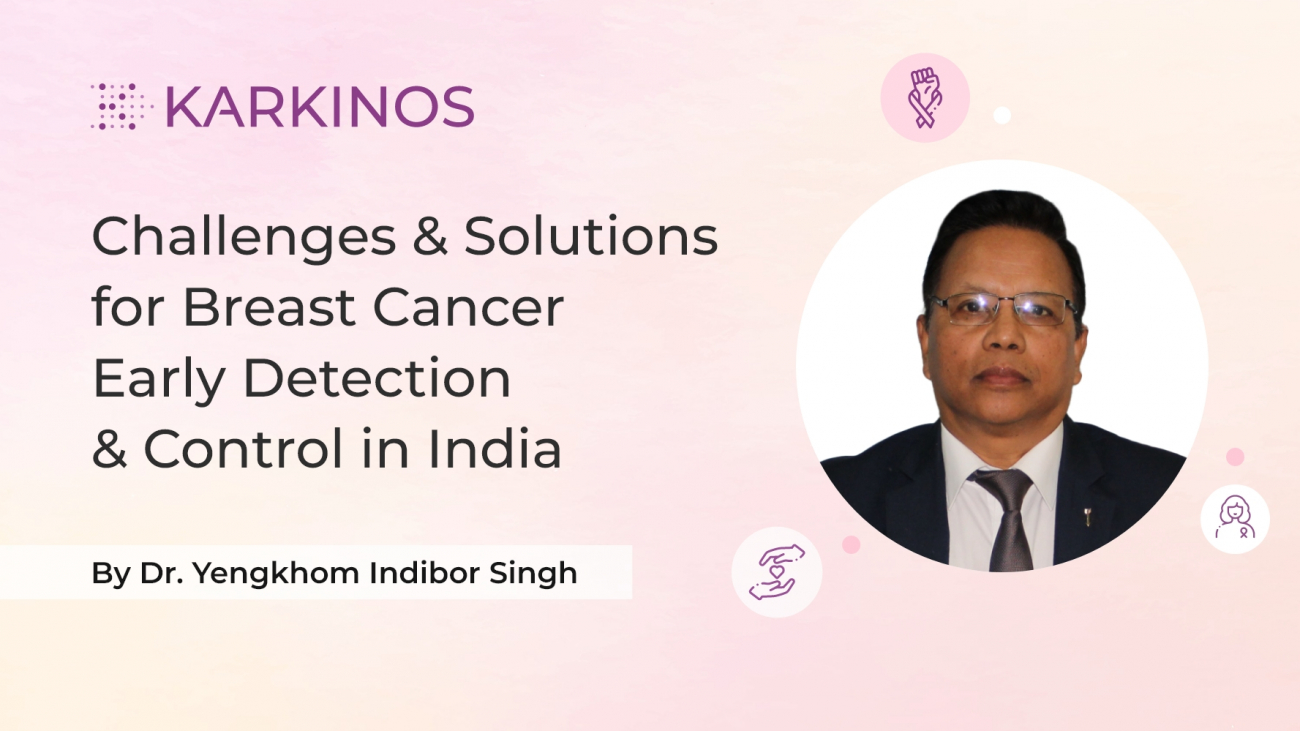 The month of October, dedicated to raising awareness on breast cancer, its risk factors, prevention and control measures, gives us the opportunity to bring to action the goals of reducing the incidence of the disease.

Global cancer statistics indicate that there is significant reduction in breast cancer mortality in high-income countries in North America and Western Europe and Australia, which may be due to the scientific advancement in treatment and early detection. However, there is no reduction in the breast cancer incidence and mortality, rather it is increasing in India and all regions of the world except North America and Western Europe. In India, breast cancer incidence is increasing at the rate of 1.7% per year and globally at the rate of 1.4% per year

Cancer care providers and government health agencies are now convinced that if the gruesome menace of breast cancer must be stopped, prevention will be the best solution, failing which, detecting and treating it at an early curable stage must be aimed.

The development of breast cancer is very complex and is poorly understood. As in many cancers, it is not very clear what causes normal cells to transform into cancer cells that grow out of control and proliferate resulting in tumor formation in the breast. Researchers, however, know that certain lifestyle, reproductive, environmental, hormonal, and genetic risk factors are associated with the development of breast cancer.

In India, breast cancer has surpassed cervical cancer to be the number one cancer and the cause of cancer related deaths in the country. The data available from the population-based cancer registries (PBCRs) in several regions of India supported by the National Centre Disease Informatics and Research (NCDIR), Indian Council of Medical Research (ICMR), have led to a better understanding of the breast cancer pattern and burden in India. The fact that 178,500 new breast cancer cases occur and 90,500 women die of it every year underscores the urgent need for reducing breast cancer burden in India.

In the light of breast cancer emerging as a major public health problem affecting women’s welfare, India has stepped up its efforts to bring about awareness on breast cancer among the masses through education information campaigns (EIC). These efforts aim to create breast awareness, by focusing on how to reduce exposure to the risk factors that increase the chance of developing breast cancer, symptoms, and signs of breast cancer and the importance of periodic self-breast examination and physical examination by nurses and doctors for early detection that substantially improves cure rates from breast cancer. More than 95% of women will be cured if their breast cancer is detected in early stages.

The factors that increase the risk of breast cancer are given in Boxes 1 and 2. Some risk factors are modifiable (Box 1) while others are not (Box 2).

Box 1: Risk factors that can be changed

Breast cancer prevention: How to reduce the risk?

Although there is no sure way to prevent breast cancer, there are things one can do that might lower the risk, such as changing risk factors that are under one’s control. This is particularly relevant for women with known risk factors for breast cancer, such as having a strong family history, history of hormonal intake, nulliparity or certain inherited gene mutations.

Breast cancer prevention starts with healthy habits and lifestyle changes. Awareness of risk factors, a conscious thought and a strong will to prevent cancer in oneself, and behavioural change are essential elements in cancer prevention.

Research shows that abstinence or limiting alcohol consumption to less than one drink per day, being physically active, maintaining a healthy weight, breast feeding, eating a healthy diet and limiting post-menopausal hormone treatment can reduce the risk of breast cancer even in high-risk women. The rising incidence of breast cancer in many countries is mostly due to changing, sedentary lifestyles leading to an increased exposure to risk factors.

Breast cancer can be detected in early stages when treatment is effective and high cure rates are achieved by screening asymptomatic women using clinical breast examination (CBE) performed by a doctor annually or biannually beginning at the age of 30 years. In fact, screening recommendations change from country to country. There is sufficient evidence from large studies in India that CBE provided every two years or three years for women aged 30 years and above leads to early detection of breast cancer toward a lower stage and to high cure rates after treatment.

Being breast aware and vigilant about changes in breasts such as a lump or skin changes noticed during periodic breast self-examination (BSE) is important for breast cancer early detection and control. Practicing BSE also improves breast cancer awareness. If any changes as shown in box 3 are noticed in breasts on BSE, a doctor should be consulted promptly.

Box 3: Signs and symptoms that prompt physical examination by a doctor

However, a systematic mammographic screening programme at the population level is not feasible in India as it requires substantial resources, infrastructure and trained manpower. On the other hand it remains as an important early diagnostic tool in women with suspected breast cancer and women detected with breast lumps and other signs on CBE.

Breast ultrasound that uses sound waves and their echoes to make computer pictures of the breast, can show certain breast changes, like fluid-filled cysts, and in dense breasts that can be harder to see on mammograms. Magnetic Resonance Imaging (MRI) that involves radio waves and  strong magnets is used for screening in certain specific situations such as in high risk women with BRCA 1 or BRCA 2 mutations.

Hence, a country like India should focus on promoting early clinical diagnosis through breast awareness, BSE and CBE, diagnostic imaging with mammography with or without ultrasonography, fine needle aspiration cytology (FNAC) and /or biopsy linked with prompt and adequate treatment. This approach is called ‘triple diagnosis’ or ‘triple assessment’ includes physical examination, imaging (diagnostic mammography and/or ultrasonography) and biopsy (FNAC or core/excisional biopsy) is more accurate (around 99% accuracy) than any single modality for early diagnosis. The existing healthcare infrastructure needs to be further strengthened in a phased manner to meet the demand for triple assessment for early diagnosis. Conducting awareness campaigns is the right approach to educating masses on breast cancer and other cancers and their prevention.

Just by establishing the infrastructure we cannot ensure a reduction in cancer burden. Awareness campaigns and subsequent follow-up ensuring that no citizen is denied end-to-end cancer care services is essential and Karkinos Healthcare is very well-positioned to provide the entire continuum of care. Karkinos’ distributed cancer care model supported by a technology platform, with the Command Center as the hub, will ensure that there is a larger scope for the physicians and healthcare workers to connect with the persons and patients and provide services either through physical or online modes.

From cancer prevention to palliative care, Karkinos Healthcare will ensure that its mission to address gaps in cancer care, especially in Eastern India, is fulfilled in the years to come.

Dr. Y Indibor Singh is a Professor of Radiation Oncology at RCC RIMS, Imphal. He is a Post Graduate in Radiotherapy from IRCH, AIIMS, New Delhi and is post graduate diploma holder in Clinical research (PGDCR) Catalyst, Delhi. He has to his credit a course completion in Colorectal Cancer conducted by ACME, USA.

Dr. Indibor is trained in Brachytherapy from TMH, Mumbai, a course sponsored by the National Academy of Medical Sciences, New Delhi. He was awarded a Fellowship of Indian college of Radiation Oncology (FICRO) in 2016. His teaching experience spans for about 32 years. Dr. Indibor also has to his credit of presenting and publishing several research papers in leading cancer-based national and international journals and publications. He has presented insightful research papers on cancer management at leading international, national, and regional conferences. Notable among them is the research abstracts that were submitted and published online in ASCO.

He is known for his involvement as Clinical Research Coordinator of a National Project on ‘A comprehensive understanding of Nasopharyngeal Cancer in North East India’, funded by the Department of Biotechnology, Govt. of India. He has also been instrumental in setting up a tobacco cessation clinic in NE India.

Dr. Indibor is the recipient of several awards and accolades right from his Post Graduation days. He has a Certificate of Appreciation for Excellence during his PG training and health service in rural and hills; an outstanding award from AROI national body of Radiation Oncologists; and a Certificate of Appreciation from Manipur Govt. for implementing the PMJAY scheme. In his current position at Karkinos Healthcare, Dr. Indibor is a Senior Radiation Oncologist, North East region.