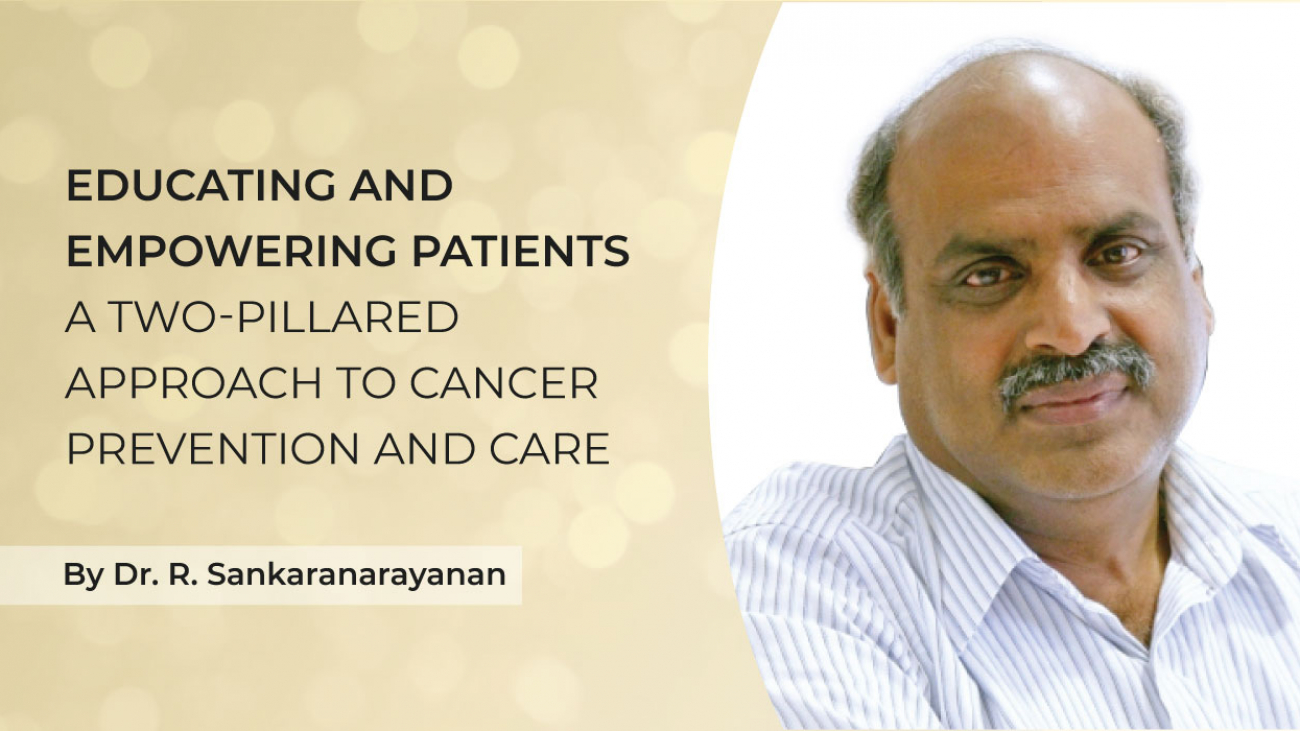 Cancer ― the Emperor of all Maladies ― is one of the greatest health challenges to mankind and is one of the leading causes of death across the globe. I have personally seen the disease to devastate families and to drag people to extreme poverty. It is a disease of difference not only agonizing at an individual level but also at a societal level.

The primary outcome of cancer treatment is the long-term survival and cure. This is possible if cancer is diagnosed in early stages and adequate treatment is taken. Major drawbacks of the treatment of advanced cancer are poor survival, catastrophic, out-of-pocket cancer care expenditure following treatment, where people have failed to get a basic medical insurance cover either through government schemes or through private insurance companies. And the secondary outcomes include illness induced poverty, economic hardship, poor Quality of Life (QoL) and psychological distress.

In India, cancer occurrence in general is increasing due to the ageing population, variety of ways tobacco and/or alcohol uses and changing life styles with less physical activities and increasing frequency of overweight/obesity among others. These factors along with serious challenges in our country, like the widespread healthcare inequities, limited financial resources, poor infrastructure and education, densely populated cities or remote inaccessible regions, and segments of the society that are socio-economically backward add on to increase India’s cancer burden.

With a population touching 1.39 billion, the growing incidence of cancer has become one of the major causes for a serious health crisis in the country. The International Agency for Research on Cancer – GLOBOCAN – has estimated that the burden of cancer in India is likely to increase significantly with an estimated incidence of about 2.09 million cases by the year 2040 (an average percentage change of 2.1%). In fact, these estimates on incidences are largely undervalued as the cancer burden in India is substantially higher given the lack of proper cancer information systems in many regions of the country and significant under diagnosis of prevailing cases. This is largely due to the restricted access on an already overextended cancer health care infrastructure in India.

Unfortunately, India experiences a double burden of cancer, with infection-related cancers typically associated with poverty still being common, combined with an increasing incidence of lifestyle-associated cancers, such as oral, lung, breast, and colorectal cancer. All this places a major strain on our already stretched and limited health care systems that India has to offer, which is characterized by inadequate infrastructure, unskilled human resources, and poor access provisions to cancer care that is most importantly unaffordable.

Typically, the infrastructure and resources needed to ensure access to cancer care in India are limited, despite all the efforts by the different ruling central and state governments of the past and the present.

Karkinos Healthcare at the Hub of Cancer Prevention and Cure

For many years, I have been involved in India’s cancer prevention and control initiatives. And, it is a pity to note that almost half the cancer burden in India is accounted by head and neck, lung, colorectal, breast, and cervical cancers that are preventable and/or cured by early detection and treatment at affordable costs with less toxicity. Also, 30% of all cancers diagnosed in our country can be attributed to tobacco use, mainly in the form of smokeless tobacco (like gutka, pan, etc.).

Karkinos Healthcare has the perfect blend of expert oncologists, nurses, medical technologists, and digital transformers, who can enable a multi-pronged approach across prevention, early detection and diagnosis, treatment, and palliative care.

When it comes to delivering effective cancer care, a sequence of health services is required – including cancer awareness; prevention; screening; early detection; diagnosis; referral; affordability and access to treatment; follow-up; pain management; and  palliative care. A break in the sequence of care would mean loss of life. To prevent the loss of lives by early detection and to provide holistic care at affordable costs are Karkinos Healthcare’s primary objectives.

Karkinos Healthcare will play a larger-than-life role in enabling every step in the sequence of end-to-end cancer care and will always work to ensure that there is no break at any point in the sequence of cancer care. This is made possible because Karkinos Healthcare has the perfect blend of expert oncologists, nurses, medical technologists, and digital transformers, who can enable a multi-pronged approach across prevention, early detection and diagnosis, treatment, and palliative care.

Our combined efforts have brought forward a world-class holistic ecosystem of cancer care that primarily aims to enhance access to healthcare services to the underserved and neglected populations of India.

The team will achieve this through an advanced technology enabled data driven platform wherein the knowledge architecture is centralized, and the delivery systems are democratized and distributed in a cost-effective manner. Also, by deploying a ‘hub-and-spoke and further spoke model’, robust digital technologies, and advanced clinical decision support systems, Karkinos Healthcare can reverse the late identification of cancers that are beyond treatment in patients to early life saving intervention methods.

Karkinos Healthcare’s superior technology-backed cancer clinical pathways lay down the most appropriate model for all cancers that provides early intervention, enable anchor referral hospital/s that cater to complex cases, surgery, and radiotherapy supported by a network of smaller centers.
This model, I believe, is ideal for catering to early detection and prompt treatment so that the treatment can be decentralized, which also reduces the load on apex cancer centers for noncomplex treatment while increasing accessibility, and cutting down on cancer care expenditure and loss of productive days for the family.

Breast and cervical cancers are two of the most common cancers among women worldwide and are the two leading causes of cancer-related death of women in India. Each year, both the cancers rob more than 100,00 Indian women and their families of the chances of a healthy life. Earlier, cervical cancer was the most common cancer throughout the nation, but now the incidence of breast cancer has surpassed it and is the leading cause of death.

Cancer researchers and oncologists know for a fact that despite cervical cancer being a fully preventable disease, women, mostly in semi-urban and rural India, are the victims of this disease. This is mainly due to the lack of awareness, prevention, timely screening and early diagnosis. Breast cancer in high risk genetically predisposed women can be prevented if timely risk assessment and prophylactic surgery are done on the basis of early detection on yearly screening. The challenge with both these cancers is that nearly 80% of the cancer patients in India present themselves at stage III or IV with poor prospects of long-term survival and cure. Unfortunately, around 40-60% of the women in late-stage cancers die within the first year of diagnosis.

This is why screening for preventable cancers become an important tool to combat cancer-related morbidity and mortality. Several studies have proved that regular screening programs for the early detection of precancerous lesions (e.g., cervix cancer, oral cancer, colorectal cancer) or early invasive cancer (breast, oral cancer, colorectal cancer), and their prompt treatment before they progress to invasive cancer or advanced cancers, have led to a reduction in the incidence of or deaths from both breast and cervical cancers. This is where one of the major objectives of Karkinos Healthcare’s rests. Our team will aim to bring about an impactful difference in preventable and early detectable cancers, ensuring access to high-quality care, periodic screening tests, and regular follow-ups among the cohort of people screened.

It is also important for Karkinos Healthcare to align its objectives with the United Nations that aims to achieve Goal 3.4 of the Sustainable Development Goals (SDG 3.4) to reduce premature mortality from non-communicable diseases, including cancer, by one-third by 2030. Karkinos Healthcare, I believe, is rightly positioned with a two-pillared approach to help achieve this tall goal set by WHO.

Our first approach is to impart knowledge to the citizens by educating them on the risk factors and warning signs of the common cancers. The second approach is, based on the knowledge imparted, Karkinos Healthcare will empower the screened citizens, who are predisposed to the cancers with evidence-based treatment protocols.

The organization’s first approach is to impart knowledge to the citizens by educating them on the risk factors and warning signs involved in the identification and prevention of the cancers. There has been a notable progress in understanding many major causes of cancer, such as tobacco use, alcohol consumption, obesity, poor diet, and other lifestyle factors, as well as exposure to certain infections, radiation, chemical agents in the workplace, and air pollution. Our expert oncologists and trained medical personnel will transfer much of this knowledge in creating the right awareness among citizens and further put it into effective preventive interventions.

The second approach is, based on the knowledge imparted, Karkinos Healthcare will empower the screened citizens, who are predisposed to the cancers, adhere to referral, further investigations and treatment. Karkinos Healthcare will also ensure the Quality of Life is maintained for the patient through-out and will also ensure that the cancer treatment is delivered in the most cost-effective manner.

Although, the pathways are well-defined in preventing and early diagnosis of cancer, the process faces several roadblocks and barriers. Karkinos Healthcare, however, has placed its digital algorithm-backed supportive medical infrastructures and operations that can engage citizens in successful reduction of their cancer risk and at the same time be informed about evidence-based actions that are communicated in clear, unambiguous scientifically accurate, easy-to-understand local language, to empower the patients to take guided, informed decisions.

The team at Karkinos Healthcare will be the torchbearers of hope and cure in end-to-end cancer care. This mandate will not only lead us to the goal of achieving sustainable solutions in cancer care but also lead us to align our objectives with India’s ambitious Universal Healthcare Coverage plans.

Our team is also cognizant of the existing social inequalities in cancer care delivery. As healthcare is a basic need for every Indian citizen, taking cancer care to the last mile will be Karkinos Healthcare’s second most important objective. The company aims to harness the developments in digital medical technology in delivering cancer care via mobile apps, video-conferencing, telemedicine, teleradiology, and other modern communication-based consultations to deliver cancer care close to the citizen’s or to the patient’s home.

Ultimately, in our broad mandate, while bridging the gaps in cancer care delivery, Karkinos Healthcare aims to contribute to the elimination of cervical cancer and control other cancers by early detection and treatment in the cohort of citizens and patients screened and diagnosed. The team at Karkinos Healthcare will be the torchbearers of hope and cure in end-to-end cancer care. This mandate will not only lead us to the goal of achieving sustainable solutions in cancer care but also lead us to align our objectives with India’s ambitious Universal Healthcare Coverage plans.

He was the former Chief of the Cancer Screening Group, Early Detection & Prevention Section and Special Advisor on Cancer Control at the International Agency for Research on Cancer in Lyon, France. He has an MD degree in Radiation Oncology followed by post-doctoral training in Pittsburgh and Cambridge. After several years of experience in clinical oncology and cancer control in India, Dr R Sankaranarayanan joined the International Agency for Research on Cancer (IARC) in 1993.

Currently, he serves as Senior Visiting Scientist at WHO-IARC in Lyon, France. He advises Governments of Tamil Nadu, Kerala in India and several Latin American, Middle-Eastern, South and East Asian and African Governments on cancer prevention, early detection, control and development of efficient, accessible and affordable cancer health services. He has authored more than 260 papers in international peer-reviewed journals and his manuals on early detection of cervical cancer have been translated into several languages including Chinese, French, Hindi, Portuguese, Russian, Spanish, Thai, and Turkish among others.