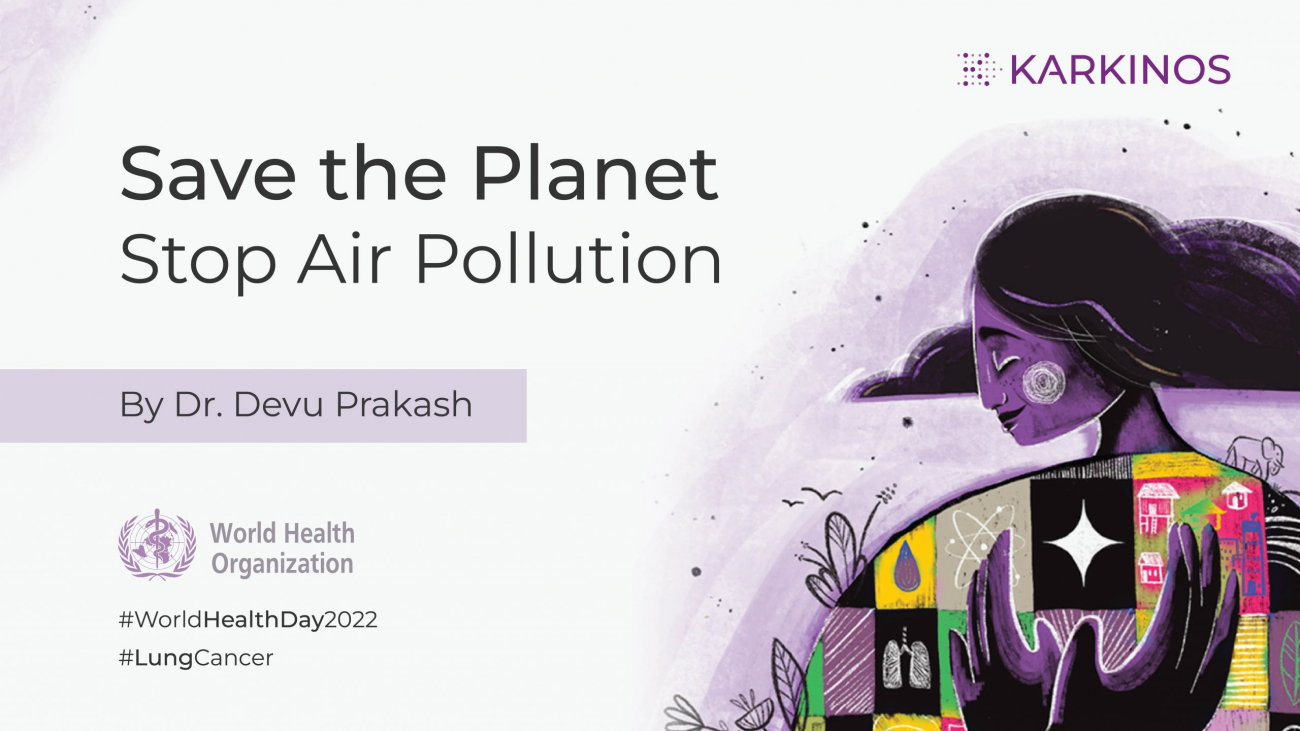 How do nonsmokers develop lung cancer? Is air pollution the cause?

It is the 7th of April – World Health Day – a dedicated global health awareness day created under the auspices of the World Health Organization (WHO) and other related organizations. This year, 2022, the World Health Day’s theme “Our Planet, Our Health” centers on the link between the health of our planet and the health of all living creatures – humans, animals, and plants. On this day, worldwide campaigns are held to promote messages and activities that showcase how individual choices and social behaviors impact our environment.

In the midst of the pandemic, a polluted planet, and increasing diseases like cancer, asthma, heart disease, WHO, on this year’s World Health Day, asserts global attention on urgent actions needed to keep humans and the planet healthy and wants to foster a movement to create societies focused on good well-being.

As the World Health Day offers a global opportunity to capture attention to the critical public health issues that affect the global communities, Karkinos Healthcare, on this day, intends to create awareness on lung cancer primarily caused by environmental factors and explain how nonsmokers develop lung cancer owing to air pollution.

The WHO estimates that more than 13 million deaths around the world each year are due to avoidable environmental causes. This includes the climate crisis, which is the single biggest health threat facing humanity. And this climate change has had an effect in the rising incidence of lung cancer too, causing concern bells to ring everywhere. The etiological factors of lung cancer have become more multiplexed because of the increasing industrialization and environmental pollution around the world, including India.

Lung cancer is known to be the leading cause of cancer death worldwide and the third most common cancer following breast and cervix. Although the primary factor leading to lung cancer is tobacco smoke, the rate of lung cancer in nonsmokers is substantially increasing due to the effect of breathing unhealthy and polluted air.

Constant exposure to air pollution increases the risk of lung cancer. Air pollution particles are inhaled deep into the lungs and the body detects these as foreign particles and triggers an inflammatory response in an effort to get rid of them. Chronic inflammatory responses and repeated deposits of particulates can interfere with the lung cells’ capability to repair themselves, damaging the DNA and increasing the risk of developing cancer.

There are several risk factors for the development of lung cancer in nonsmokers and some of these include: age, secondhand smoke, cooking fumes, radon, environmental exposures, genetic factors, underlying lung disease, oncogenic viruses, and estrogens. Lung cancer in nonsmokers is almost exclusively non-small cell lung cancer, with adenocarcinoma being the most common type. There are many different genetic mutations seen in non-small cell lung cancer. Some of the most frequently occurring in nonsmokers include EGFR mutations, KRAS mutations, and ALK rearrangements. With the discovery of specific genetic mutations, there has been the development of particular treatment targets to these mutations which have shown promise in the treatment of lung cancer.

Both the outdoor air as well as indoor air can be polluted. Most outdoor air pollution comes from human-made sources such as vehicle emissions, power generation byproducts from coal power plants, and manufacturing and industrial facility byproducts. Air pollution from these sources generally includes: ground-level ozone; noxious gasses like carbon dioxide, carbon monoxide, sulfur oxides, and nitrogen oxides; and particulate matter like chemicals, dust, and metals. Naturally occurring sources of outdoor air pollution can include gas and ash from volcanic eruptions, methane from natural wetlands, and smoke from wildfires.

This fine particulate matter is tiny enough to be inhaled through the nose and throat and pass into the lungs. Once in the lungs, these particles can cause serious health problems. Epidemiological studies point to a correlation in particulate air pollution and an increase in heart disease, lung disease, and reproductive diseases and their associated causes of death. Lung cancer research has also shown an increased risk of cancer incidence associated with long-term exposure to such particulate matter.

Research says that the chances of getting lung cancer has increased with increase in household air pollution. In countries like India, exposure to pollutants in and around homes from the household combustion of polluting biomass fuels on open fires or traditional woodfire stoves for cooking has increased the risk for air pollution-related lung diseases.

Likewise, indoor air pollution can also be a major cause of lung cancer, especially in rural India. Research says that the chances of getting lung cancer has increased with increase in household air pollution. In countries like India, exposure to pollutants in and around homes from the household combustion of polluting biomass fuels on open fires or traditional woodfire stoves for cooking, heating and lighting further increases the risk for air pollution-related diseases, including acute lower respiratory infections, cardiovascular disease, chronic obstructive pulmonary disease (COPD) and lung cancer.

In India, four different types of cooking fuels are used: biomass fuel (wood, cow-dung cake, agricultural waste, coal etc.); liquefied petroleum gas (LPG); kerosene and a mixture of these. About 95% of the rural population in India still relies primarily on biomass fuels (dung, crop residues, and wood) for cooking. Use of these fuels causes a number of respiratory problems, which include acute respiratory infections in children, chronic obstructive lung disease in nonsmokers and lung cancer. Domestic coal combustion is known to cause arsenic, selenium poisoning and even mercury poisoning that can be carcinogenic.

Statistics says that the ill-effects of indoor air pollution result in about 2 million premature deaths per year, wherein 44% are due to pneumonia, 54% from chronic obstructive pulmonary disease (COPD), and 2% from lung cancer. The most affected groups are women and younger children, as they spend maximum time at home.

People susceptible to lung cancer usually present with one or more of the following symptoms:

Screening for Lung Cancers in Nonsmokers

It is a known fact that early detection could potentially decrease lung cancer mortality. Based on a risk assessment analysis of nonsmokers, individuals at risk (especially women exposed to indoor pollutants) can be screened for lung cancer. Screening usually involves the use of chest X-ray, sputum cytology, and a low-dose computed tomography (CT) scan to diagnose the disease.

Individuals who use either smoking tobacco or smokeless (chewable) tobacco are recommended to take part in regular screening programs. Also, individuals who are frequently exposed to chemicals like asbestos, combustion materials or other cancer-causing materials, and those with a family history of lung cancer have to be screened regularly.

Diagnosis and Treatment of Lung Cancer

An X-ray image of the lungs may reveal an abnormal mass or nodule. A low dose CT scan can reveal small lesions in the lungs that might not be detected on an X-ray. For further diagnosis a sputum cytology is done. The sputum is observed under a microscope to detect lung cancer cells. Further, a biopsy is done to stage the cancer.

A WHO study found that at least 1.7 million cancer deaths annually could be prevented through healthy working and living in non-polluted environments. As lung cancer can be prevented if people have sufficient knowledge on the risk factors posed by their environment, appropriate messages on the dangers need to become more widespread. Governments must also formulate policies that are conducive to raising awareness and must include environmental and occupational risk factors which contribute to lung cancer.

Cancer care organizations like Karkinos Healthcare conducts several outreach programs and cancer screening programs that screen individuals based on risk factors and susceptibility to cancers. Participating in such programs can help individuals be aware of the risk factors and as well get an early detection of lung cancer that leads to better treatment outcome and prognosis. Remember early detection saves lives!